PEW-PEW: Lessons on How a Virtual Ape started Degen Royale

Degen Royale is the first “play-to-socialize” experience where you can play as some of your favorite NFTs! Top communities on Ethereum and Solana meet on Degen Isle to dance, socialize, and blast each other in a wacky shooter game.
October 24, 2022 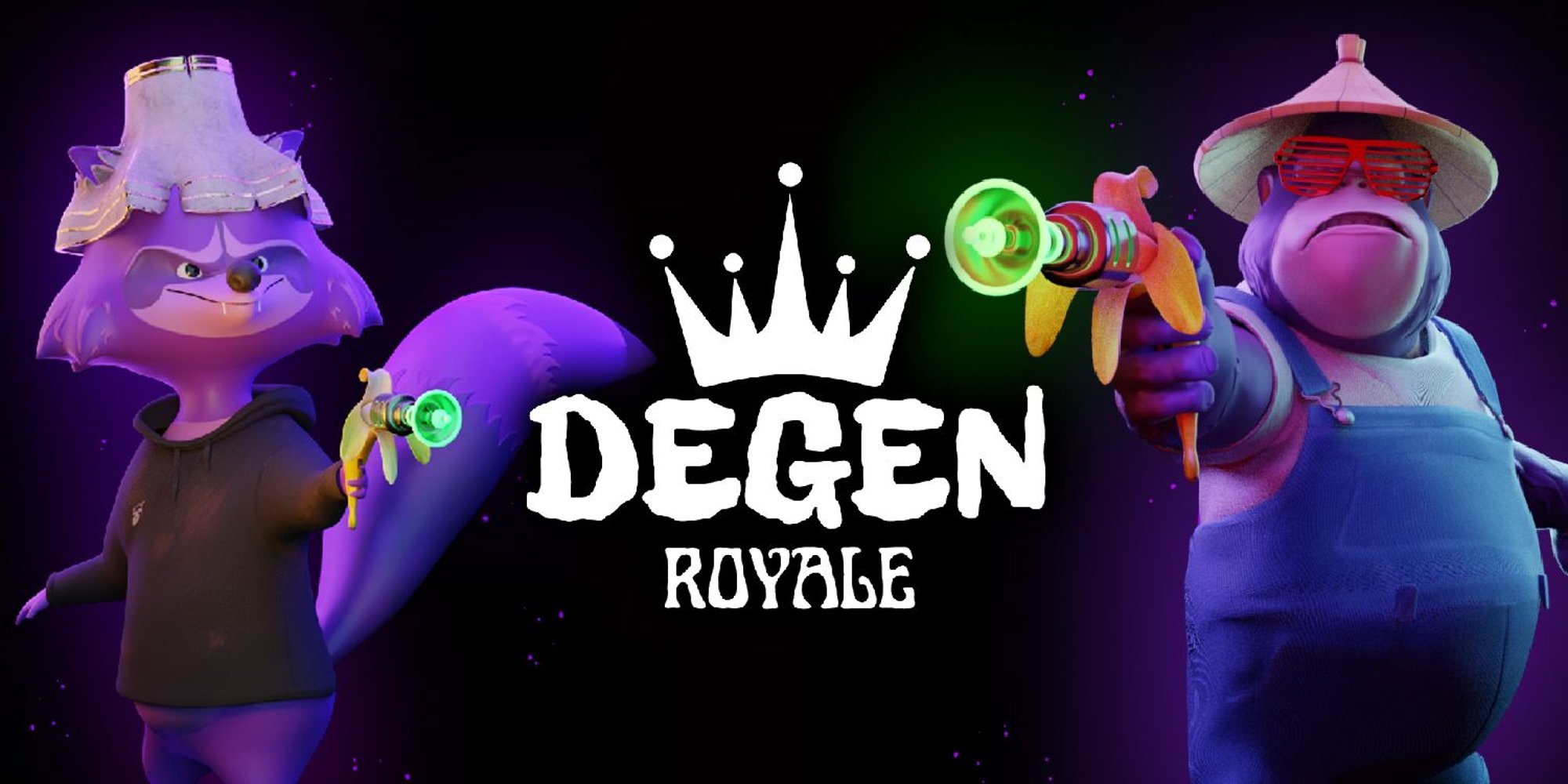 With his infectious laughter, it’s hard to not enjoy interacting with Nick Yap — co-founder of Degen Royale. Nick has decades of experience in data science, machine learning, software development, and tech startups.  He’s always first to give and his genuine demeanor is reflected in his action-oriented approach.

In 2018, he and Kevin Oranje co-founded Interverse.ai. Kevin is more vigilant and responsible in his approach. He ensures things get done right — all traits that make a perfect match for his role as CEO.

When they co-founded Interverse, they wanted to create an immersive “metaverse” where people could interact and socialize with each other. They first focused on using voice AI to create intelligent virtual avatars for enterprises like event hosts, shop assistants, tour guides and more.

While Interverse was successful, Nick and Kevin pivoted in search of more creative freedom — something that aligned really well with Web3. In April 2022, they joined Degen Ape Academy where things really took off.

One issue Nick & Kevin noticed with virtual avatars in general was their low-engagement. They felt generic and lacked genuine emotional connection. The avatars work for certain things, but never caught on in building a truly immersive “metaverse”.

So instead of forcing the emotion, Nick & Kevin looked at the problem through a different lens. Why not start with something that people already have an emotional connection to, like NFTs?

Thus, “Philly” was born.  Philly is a virtual character based on Degen Ape #4283 with his own Twitter and Discord. Oh, and he can dance.

Nick learned from his career that a key skill for any founder is testing and validating what works. Nick & Kevin tested dozens of ideas that could help NFTs feel more social and emotive, building off the existing tribalism of NFTs. Memes. Daily twitter spaces. Different poses. Most of them failed.

Then one day, Kevin sends Nick a video. It was nothing more than a silly 6 second video of Philly dancing. Kevin knew the quality could be much better.

Engagement explodes.  People keep asking, “Can you make my ape dance too?”

The test was a success! That meant it was time to double down on the ideas that work.

For Philly, this meant making more apes dance for anyone who asked. After teaching 62 more apes to dance, they made 7 final videos of dancing apes

Next stop: AR Filters for Apes

Philly’s dance moves were engaging. But the activity was passive. It wasn’t exactly Web3 culture. People weren’t empowered to make and own their creations.

Web3 culture lets everyone share ownership of a project. That means the IP. The important decisions. And so on. It boils down to empowering people with the ability to make significant change in our world.

The team could have created hundreds of 3D dancing apes. But another key skill for founders in resource allocation. Making hundreds of apes would have taken too much time away from the team growing, expanding, and testing more ideas for Philly.

To keep building momentum and scale, the team made AR filters that let holders “wear” a virtual mask of their ape. Since fans were now making videos, this freed up the team’s time to test more ideas.

Now that some time was freed up, they could experiment with ideas to fuel Philly’s growth. They knew the dance worked. And began to think: What else could Philly do?

Like the AR filters, video games are another fun and active way to embrace the spirit of Web3. Games are immersive. And they’re fun. But what type of game?

Research was needed. Spreadsheets were created. Data was collected from the most popular community Discord games

Shooter games were one of the most popular. So it was time for a test.  A small prototype of the shooter game was built. The dancing apes were paired with gameplay footage from the prototype to make a short video.

The video was tweeted and… Pew-pew! Another win! Dozens of fans asking “wen game?”

It was time to double down again! This time a full game dev team was hired and Degen Royale was born.

The Degen Royale shooter game takes place on Degen Isle. You’ll be able to play as either your own NFT character or a guest one from top SOL and ETH communities. Communities like Degenerate Ape Academy, Bored Ape Yacht Club, Degods, Moonbirds and more! Many of these 3D models have already been built.

The Degen Royale collection will consist of 10,000 wacky weapons that grant access to the game. The first of these weapons were 333 OG Banana Blasters. This stealth mint quickly sold out and lets holders play the first OG rumble— a free-for-all beta version of the game.

Degen Royale will also have free web3 entertainment for those not holding weapons — things like AR filters, dance videos, etc. The team is also looking into community events with free prizes, open days for the game, and other programs currently under discussion with DAOs.

More details on the game, collection, and roadmap can be found in their gitbook.

Led by a team of experienced founders, Degen Royale’s story showcases many valuable insights that are useful for upcoming creators.

According to Nick, the three main skills of a founder are:

Before Philly and his hit dance video, the team tested and evaluated hundreds of ideas. When testing ideas, you need to double down on ideas that work and shut down ones that don’t.

Finding funds for your project is always important. Part of this involves pitching your idea and data from your testing will surely help. Many places exist to find funding. But for crypto, many blockchains have funding grants like the Solana Foundation. Of course, launching an NFT collection is another option.

When Degen Royale tested the game prototype, they knew it was time to hire. Engagement was high with everyone asking “Wen game?” The demand was there, so Intervsere hired 3D modelers and game devs.

Once you have funding and the team, knowing how to allocate these resources becomes more important. For example, Degen Royale reallocated the team’s time by making an AR filter so they could focus on bigger ideas like the shooter game.

Ultimately, we’re all in web3 together. Nick’s last piece of advice to creators is to always be genuine and help others.  And when you help, be the first to give. That’s the real value in “being early”.

Nick & Kevin are super happy to help whenever creators reach out and ask questions. You can find them on Twitter or join the Degen Royale community for more info.