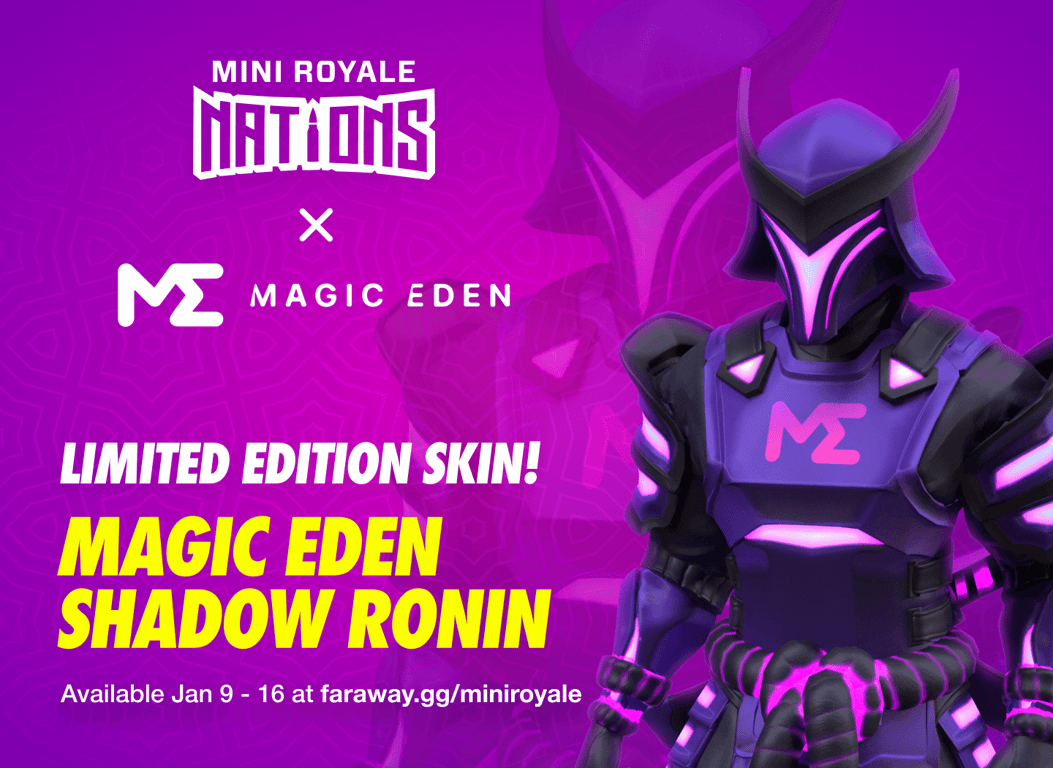 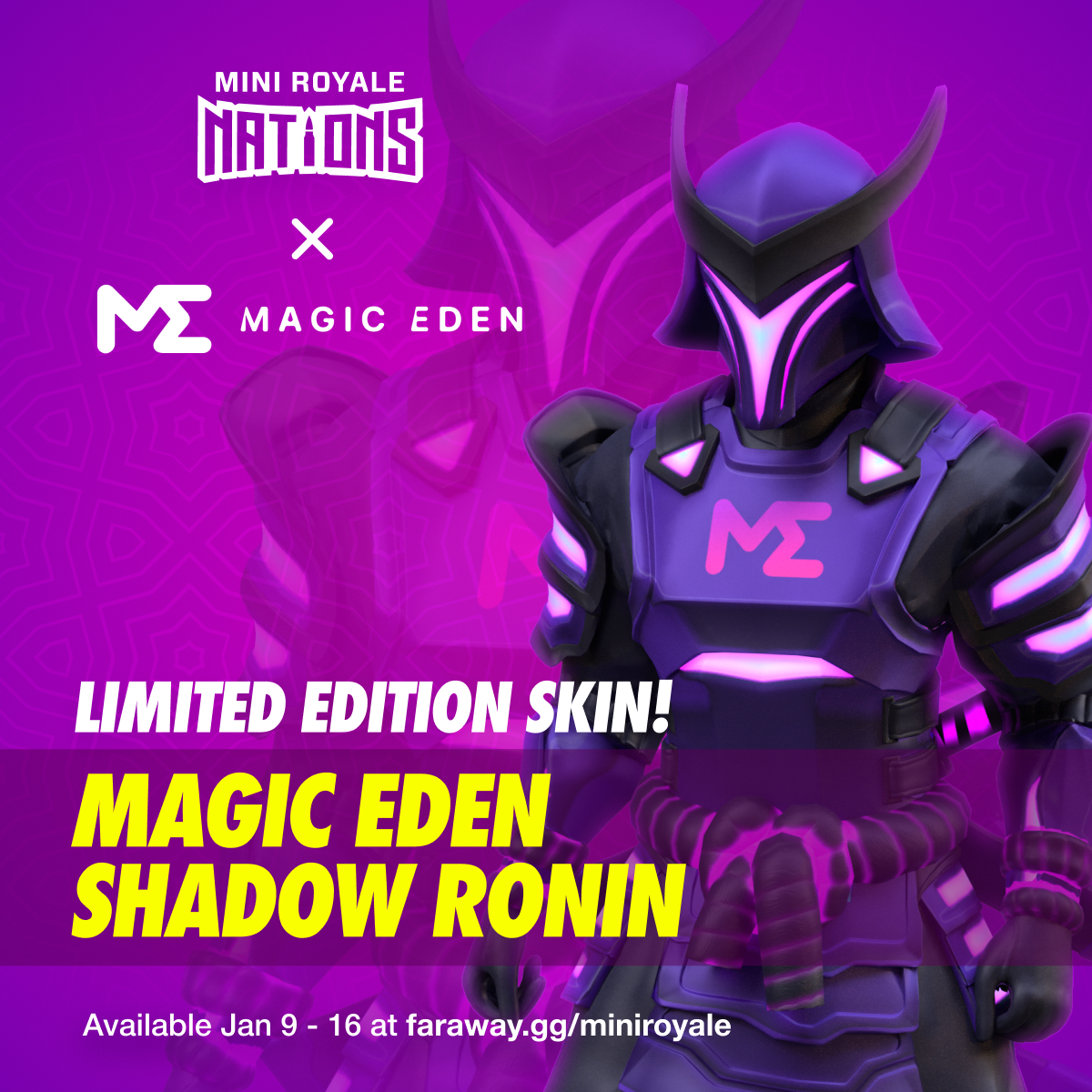 The Magic Eden Shadow Ronin is one of four skin variations of the all new Shadow Ronin Hero, live now in the Premium Samurai Drop until January 19.

How to unlock the Shadow Ronin

All Shadow Ronin Shards can be collected until January 16th. After this date, the Shadow Ronin will no longer be available, but don’t worry, you can always grab one in our Season 4 Premium Collection on Magic Eden. 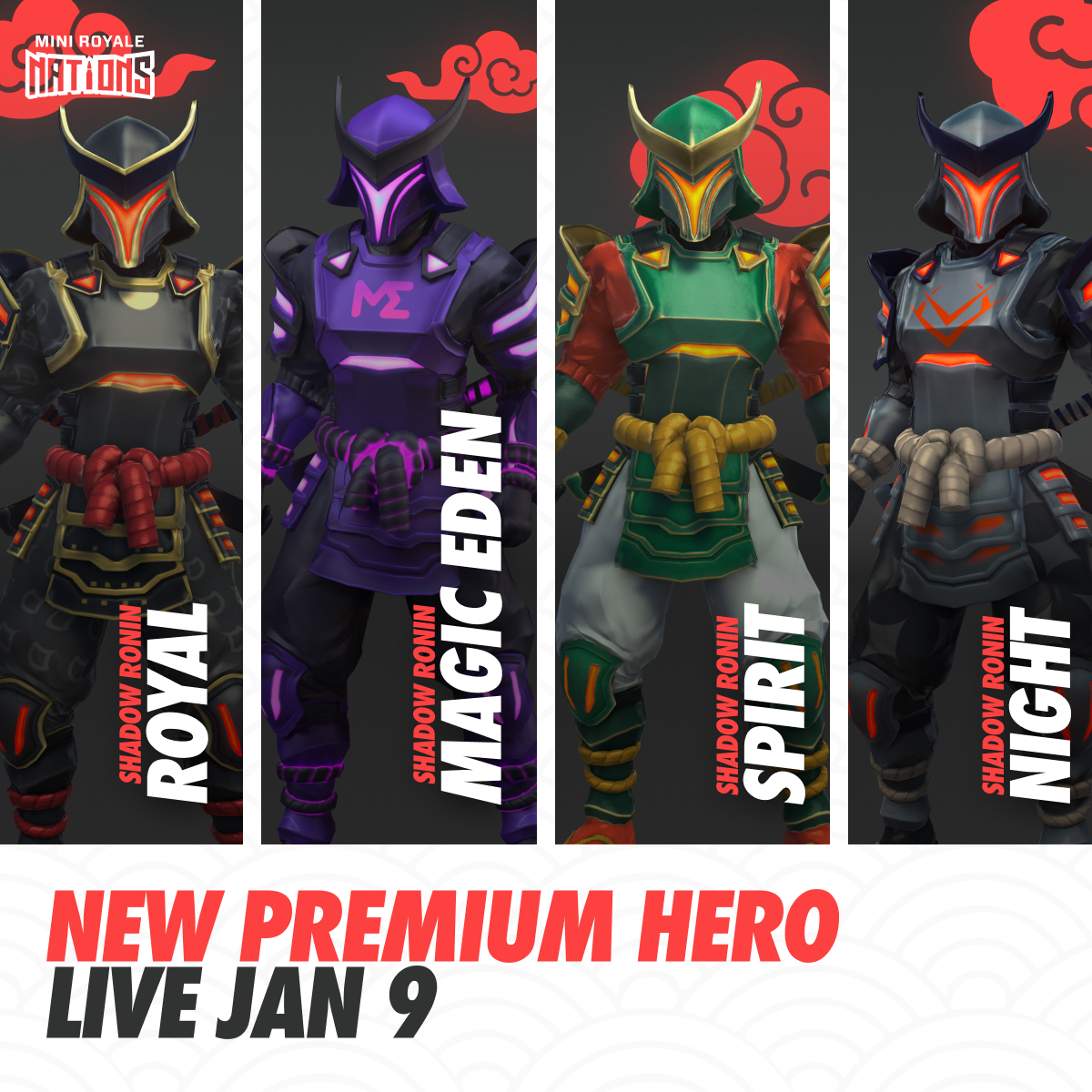 In addition to our skin collaboration, we are thrilled to announce Magic Eden as a new Clan Wars sponsor, contributing $2.5K USD to the Clan Wars Grand Prize!

Clan Wars go live on Mini Royale: Nations each week. During a Clan War, Clan members complete Raids and stake game items for leaderboard points. At the end of the Clan War, the top 6 Clans and top 100 players win prizes like $SOL, Shards, Butter, Battle Pass Points, and more. These prizes are automatically distributed at the end of each Clan War using Faraway’s Tiered Leaderboard Payout smart contracts, a feature of Faraway’s suite of web3 gamedev tools available through the Faraway Platform.

You can check out top players and prizes from last week’s Clan War on the Clan Wars Individual Tiered Leaderboard.

Mini Royale: Nations is free to play, and all players can join Clan Wars as long as they’re in a Clan. Players can join a Clan at Level 3 and create their own Clans at Level 10. Equipping any of the four Shadow Ronin skins will provide players with a 600% Raid Progression boost, and a 600% Staking boost in the Tokyo Takeover Clan War, live Friday, Jan 13 through Monday, Jan 16. This means less time needed to complete Raids, and more Economic Points for you and your Clan on the Clan Wars Leaderboard.

✅ Access to the Premium Tier of the Season 4 Battle Pass

ICYMI: Butter is an off-chain game currency that is used for:

You can also grab Loot Heroes and Weapon skins in our Mini Royale: Nations Season 4 Loot Collection on Magic Eden.

If you’d also like to read more about our Season 4 Clan Wars Jackpot and how it works, please read our post about it here. 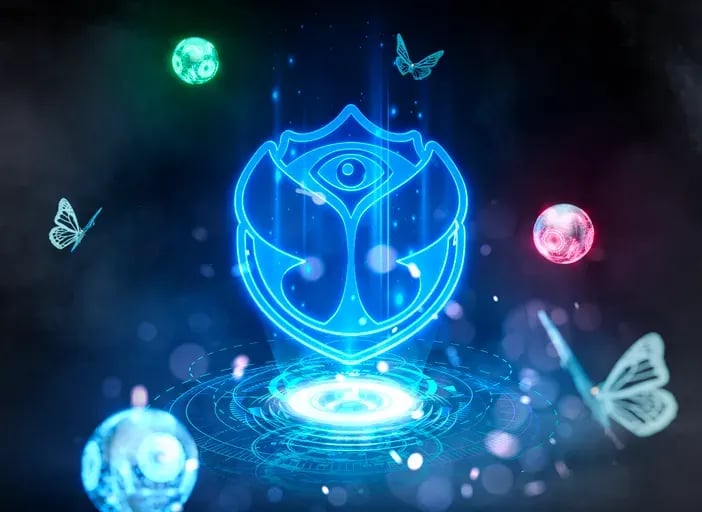 Tomorrowland, The Symbol of Love and Unity: What is the Medallion of Memoria?
Dec 14, 2022